Create a brand platform for NESCAFÉ in Singapore that pays homage to the global messaging of “It all starts with a NESCAFÉ”.

How a cup of NESCAFÉ reignited the spirit of neighbourly togetherness.

Singapore was built on close-knit communities where neighbours looked out for each other. We called it the ‘kampong spirit’. But as time passed, our bonds disappeared too.

Creating Friendships is a movement to encourage neighbours of all ages to interact over a cup of coffee.

It all started with a two-part TVC that introduced Ben, the new neighbour, as he embarks to find out more about the neighbourhood. Of course, he carried NESCAFÉ around, offering them as a gesture of friendship.

In addition to social conversations, we also brought the TVC to life on ground. In actual heartland neighbourhoods, we reached out to communities. And the NESCAFÉ red mug became the enabler that brewed neighbourly bonds.

It did so well that as of 2016, Creating Friendships is still the anchor in which the brand’s communications hinge on.


Warning: Use of undefined constant full - assumed 'full' (this will throw an Error in a future version of PHP) in /var/www/thegovt/wp-content/themes/thegovt/single-work.php on line 117 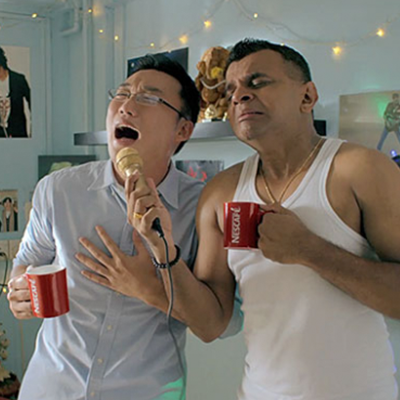 In a week of the launch, all 50,000 NESCAFÉ cups offered as a gift with purchase were sold out. Our TVCs garnered 1.5 million views in just a month and created talking points within neighbourhoods and online.